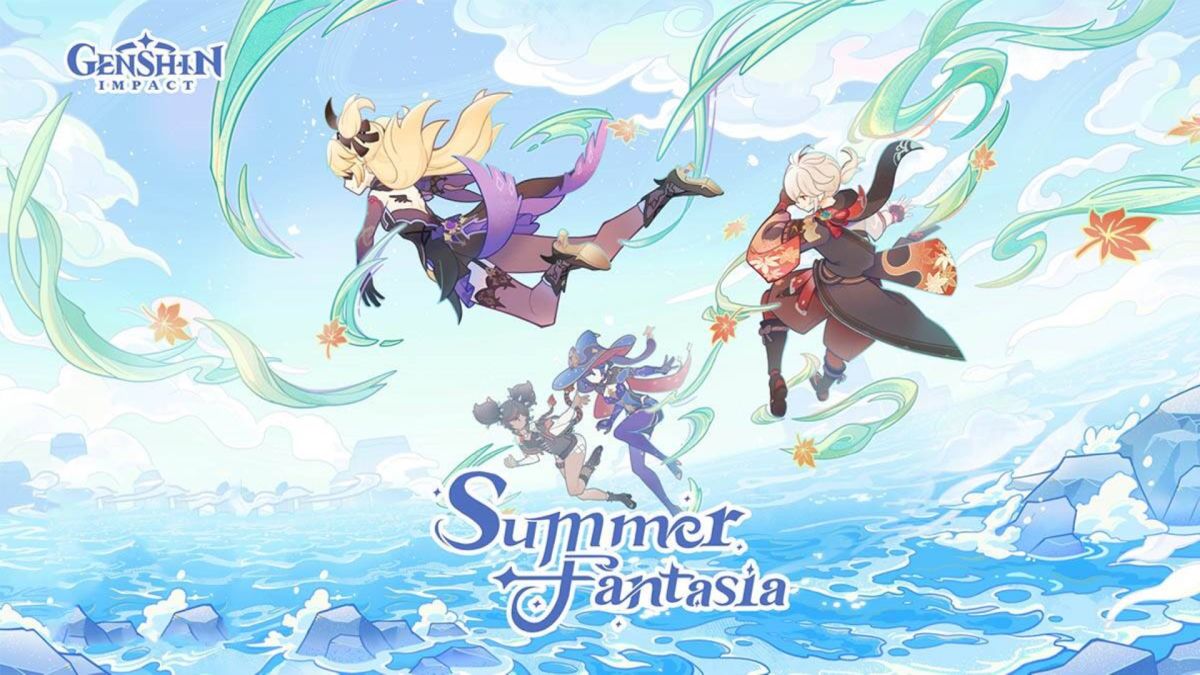 Genshin Impact continues to bring new updates and more to the game. Whether it’s like new missions, a new Wish event, or new characters, there’s always something new to check out in-game. The next update for the game, Genshin Impact Update 2.8: Summer Fantasia is on the way. Here’s what you need to know.

Genshin Impact has quickly become one of the best PS5 games, due to its constant updates. The latest update 2.8, titled Summer Fantasia, will see the opening story of Kaedehara Kazuha, where the wandering samurai gets to take on the first chapter of their personal Story Quest. Details of the mission are still a bit unknown as of now, but it looks like Story Quest will deal with the history of Kazuha, as well as that of his family, a group of blacksmiths.

Along with the new Story Quest, new skins for select characters will also arrive, with Fischl getting a new “Ein Immernachtstraum” skin, and Diluc getting an all-new “Red Dead of Night” skin, complete with its own idle animations, new effects, and more. . The Fischl skin will be available for free while playing through update 2.8, but the Diluc skin will require players to pay for it.

The update also brings smaller events, including the Evermotion Mechanical Painting event, which tasks players with having to solve a puzzle game that rewards a new furnishing of your Serenitea bowl.

You can check out the update trailer below:

The main event of Genshin Impact 2.8 update is the Summertime Odyssey event, which includes a lot of new items for players to collect. The event will take players back to the islands, complete with new landscapes where the Golden Apple Archipelago has been revamped with different themes and puzzles.

First, combat field challenges arrive in the game, and will task players with unlocking various mechanisms (including Wind Currents) to eliminate enemies within a certain amount of time. Teyvat’s sailing game mode returns as well, where players get a chance to race the open seas in exchange for some goodies if they win the race.

A new select co-op event, the Reminiscent System, is also set to join the game and will have players perform one of three different missions – Convoy, Raid, and Descent – for the chance of rewards. Caravan missions involve escorting a large raft to its destination, while Raid and Descent have players leading their Waverider to a floating platform and fighting against a massive platform in the sky, respectively.

The list of Genshin Impact characters continues to grow, although it is only one this time. Shikanoen Hizu is the only character added in this update, but he’s a big character. Heizou is a four-star character who also serves as the game’s first clash trigger user.

The character also battles with different Anemo Elemental abilities, making it a surprisingly different character to collect and experiment with.

As with the last set of characters added to the game, Heizou will get his own Story event and Hangout event which will become available throughout the 2.8 period.

Similar to previous updates to Genshin Impact, those who play the game on PlayStation will be eligible for some perks thanks to their PlayStation Plus subscription.

Once update 2.8 runs, the PlayStation Plus bundle will be available, giving players 50,000 Mora, 20 Hero’s Wit, 15 Mystic Enhancement Ore, and 2 Fragile Resin for free.

Genshin Impact 2.8 is currently slated to release on July 13, 2022. This sees Genshin Impact return to the 42-day cycle that miHoYo traditionally used for its updates after Update 2.7, which has been slightly delayed.

As always, when the update arrives, players can expect the game’s servers to be down for some required maintenance at 6:00 AM CST (5:00 PM ET / 2:00 PM PT). Players who log in after maintenance is complete, as usual, will be able to claim some Primogems as compensation for downtime.

Join @Eagle APK on Telegram channel
Rate this post
Home › Android News › Genshin Impact Update 2.8: Release date, characters, and everything new
We use cookies on our website to give you the most relevant experience by remembering your preferences and repeat visits. By clicking “Accept”, you consent to the use of ALL the cookies.
Do not sell my personal information.
Cookie SettingsAccept
Manage consent