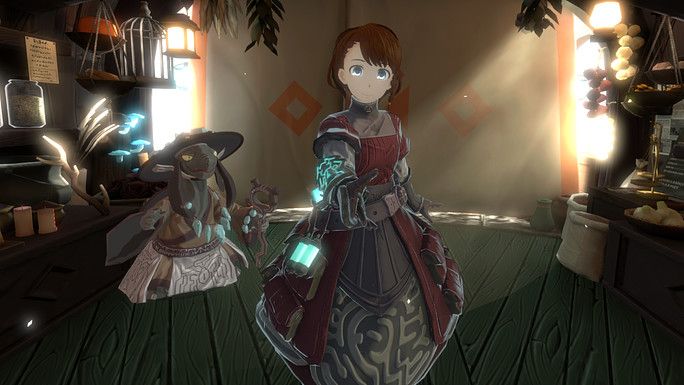 Quest 2 has a surprising lack of RPGs. A few, like Until You Fall and Zenith: The Last City, are already played on headphones; But the majority of the best virtual reality RPGs, such as Fallout 4 and The Elder Scrolls V: Skyrim, can only be played on Steam through Oculus Link. I’ve been looking forward to Ruinsmagus since it was first revealed for this very reason. A JRPG in VR with an emphasis on spell casting instead of sword and shield combat? Involve me!

Ruinsmagus has a lot to do with presentation. While I found the animation aesthetic visually appealing in the trailers, I was still initially hesitant to see it in VR. It’s not the first VR game to use this particular approach, but it’s the first I’ve played in person. My main concern was the potential sense of a strange valley to everyone; Seeing anime designs on a large scale, 3D creatures would appear to be in a zoo filled with amulets rather than a lively, breathing world. Fortunately, this is not the case.

I was instantly immersed in the world of Ruinsmagus the moment I entered. There is a great sense of depth that makes interacting with the characters more real and natural than I expected. The same can be said about the robotic enemies you encounter in your dungeon crawl, which gives off a strong vibe reminiscent of the sci-fi/hybrid beauty in The Legend of Zelda: Breath of the Wild. They occupy their virtual space well and feel threatened as a result. But it’s these enemies that give way to the weakest part of Ruinsmagus so far: the combat.

That’s a shame considering the whole game is all about it. You start with several spells, the most important of which is a bonfire that you cast from your hand. It’s the fictional equivalent of shooting a revolver, which wouldn’t necessarily be bad if it weren’t for the fact that landing shots don’t feel good. There is only a lack of gravity which gives an effect or weight to the attack. Other spells in your initial ammo aren’t attractive either.

One holds you in place while charging and unleashes a blast of lightning around you, but that’s rarely a good idea because you’re surrounded by multiple enemies in each encounter who constantly bombard you with attacks. You can also access a fireball spell that works as a magic Molotov cocktail and a grenade, both of which are tossed by swinging your arm. The problem is that doing so seems incredibly inaccurate.

It’s entirely possible that this issue stems from my end as a player, although I don’t find it difficult to move my virtual arm to throw grenades in a game like Resident Evil 4. Between the poor risk/reward of a light AOE attack and poor execution of grenades, the majority of spells available became Virtually useless, forcing me to rely on my little basic fire attack.

You are equipped with a shield to prevent the constant flow of enemy attacks and you can hold them back if you time it right. This is great, except that the shield is so big that it blocks your view and therefore makes it hard to know when an attack will hit you. Trying to deal with that while having multiple enemies attacking you – some shooting you from the sky, others blocking you with their own shield and shooting shockwaves at the ground – is not fun. The dash/dodge ability tries to help but has a slight slowdown and short range, so it’s not a viable or useful tactic.

This does not even mention very Awkward control scheme. Switching between your items is tied to the analog stick, which often resulted in me going for a healthy potion only to find that I accidentally picked a grenade or a defense booster. Your character needs to reload a spell between spells, but instead of just being a simple button press, you instead need to point your hand down before the button combination will work. I had to constantly raise my neck to the side just to make sure the reload was being recorded. The combat might be more fun later in the game when you unlock stronger spells, but I found it just frustrating.

Outside of the game, there are also a lot of translation errors. Any player hungry for JRPGs will be used to this – bugs are bound to happen because translating a game is not as simple as some might think. However, errors are common enough that they are really distracting. Navigating the menus in the layout you played is also tricky. The text overlaps itself and makes it difficult to decide which option to select.

A word of caution to any Quest 2 owner who suffers from the tiniest bit of VR motion sickness: this game can be a rough time. I’ve played virtual reality for a long time and got used to more intense experiences, but something about the action in Ruinsmagus made me physically sick. It is not a good choice for anyone looking for a friendly game towards those who are anxious in virtual reality.

As a perpetual JRPG fan, I really want to love Ruinsmagus and hope Quest 2 is another great game. It is very clear that it was made with a lot of ambition and care. I really like what is being done. However, the fact remains that overall gameplay design seemed like a boring and boring chore. Going from one annoying confrontation to the next in very empty basic dungeons isn’t the most exciting time, especially when wrestling with poor controls and lackluster fights. Ruinsmagus is a nice game, but based on what you’ve played, there isn’t much depth under its charming surface.

Join @Eagle APK on Telegram channel
Rate this post
Home › Android News › Ruinsmagus preview: A beautiful, flawed virtual reality JRPG
We use cookies on our website to give you the most relevant experience by remembering your preferences and repeat visits. By clicking “Accept”, you consent to the use of ALL the cookies.
Do not sell my personal information.
Cookie SettingsAccept
Manage consent